This is a Crimean (Republic of Crimea is an autonomous republic of Ukraine which is located on the northern coast of the Black Sea) postcard sent on 13 November, 2008 from Simferopol, the capital city the republic. I don't know who sent me this postcard, but "premier jour" was written on the postcard....... I am not sure is this the name of the sender..... I thought Premier Jour is a brand name of prefume. Anyway, the postcard shows the Vorontsov Palase in Alupka, which is situated at the foot of the Crimean Mountains. 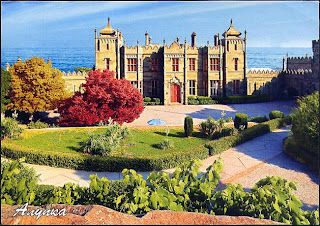 Email ThisBlogThis!Share to TwitterShare to FacebookShare to Pinterest
Labels: Republic of Crimea